So far, to be honest, I’ve been rather flummoxed by the proceedings at this conference. There seems to be massive confusion about “the cloud” and what it means for enterprise IT, both strategically and tactically. I’m not sure if the concern alleged in various sessions is something being generated by Gartner or flowing from their clients but there’s a rather dramatic difference in tone compared to their 2011 conference, which was full of optimistic and practical presentations from enterprises already well down the path of private cloud implementations. To wit:

Takeaway #1: The recurring theme from Day 1 was that enterprise IT is practically a dinosaur whose very existence is threatened by AWS.

There is an entire track called “Web-Scale IT: Can It Make Enterprise IT Competitive With the Cloud”. In session after session, analysts exhorted their listeners to think about how to use cloud techniques within their enterprise so as to not lose control of their IT operations. This despite the fact that an audience poll during the first keynote indicated that figuring out private and hybrid cloud was already the primary focus of the majority of attendees. And without regard to the various forms public clouds may take and the range of purposes they fulfill, Amazon was consistently invoked as a catchall term for “the problem” that enterprise IT must get ahead of, vs a complementary function. The notion of “own the base, rent the spike” apparently is anathema.

Keith Townsend (@virtualizedgeek) provides an excellent deconstruction of the notion that AWS is interchangeable with enterprise IT services here. Such on-the-ground realities aside, it’s useful to understand that this is the lens through which Gartner collectively (there are clear exceptions with regard to specific analysts) is organizing their commentary and advice.

Takeaway #2: Traditional infrastructure markets are well-covered and well-understood. Management and orchestration are another story.

I attended a couple of server and networking sessions and found them to be appropriately current, accurate and attuned to what’s coming in the next year or so. But IT automation? Operations Management? DevOps? Wow….

There was a general presumption throughout the sessions related to these topics that enterprises would be using packaged management tools from the so-called Big 4 (BMC, CA, HP and IBM). Every suite vendor has a multitude of tools for different purposes—many (most?) of them acquired and better integrated with the rest of “suite” in branding than in code terms, and almost all of them built for the client-server world. All of this being the case, the analysts allowed for the existence of best-of-breed management tools (even open source-based ones(!)—see section below) in various subsegments, but were primarily focused on the virtualization vendors’ moves into management. Thus we were presented a chart like this: 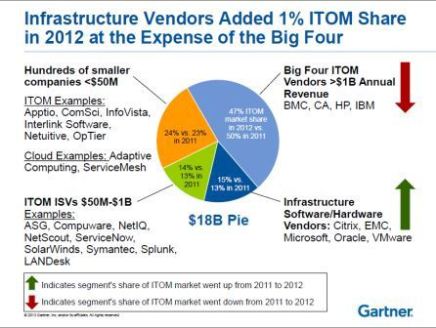 Nonetheless, the above slide was followed by the following audience poll: 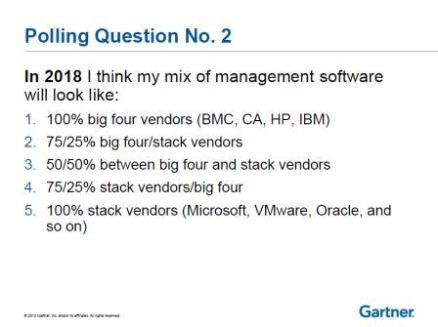 Nearly 40% (and growing) of the market as they measure it is simply pre-assigned a 0% share of the enterprise portfolio for the next four years because it doesn’t fit the narrative being propounded here.

If you’re a Gartner client, it’s worth remembering that these audience polls are used as directionally indicative if not statistically significant research tools within Gartner. The bigger problem is the cast that this general confirmation bias is likely to give Gartner’s whole research in this area. If they choose to ignore a growing 40% of the market because sometimes small players get acquired by the big guys (a comment the presenting analyst made as to why they focused on the right side of Figure 1), it means that they’re missing the real point of what the collective growth of those new entrants and the type of new expertise they bring says about enterprise needs: that the world is already quickly moving beyond client-server and server virtualization. (Similarly, in the “Aligning the Network to Data Center Infrastructure” session, the audience poll ranked “manageability, automation and orchestration” as the #2 purchasing consideration for network gear—criteria that didn’t even make it onto the radar two years ago, according to the analyst leading that session.)

The focus is on cloud management and orchestration—something Gartner spent the better part of Day 1 haranguing their audience about, but which none of the vendors discussed above provide. Or no, wait…

I was left wondering for a while how much of this blind spot was due to the analysts themselves and how much a reflection of their clientele. After all, another of their audience polls asked, “What Is Your Leading Reference Source for DevOps?” The option with largest percentage of respondents (29%) was ITIL.

One clue came from yet another audience poll from a session on hybrid clouds:

Maybe the majority of Gartner clients are in fact comfortable with clouds, and open source, and software-defined whatever and are really more interested in understanding how to put all the pieces together.

A word on Open Source and Gartner

I was sitting in and tweeting from a session on DevOps and IT automation. In such circumstances, I mostly use Twitter as a quick note-taking tactic for capturing interesting/odd comments for future use. But this one kind of took on a life of its own:

The comment was in a DevOps context and referred to release management and cloud management platforms. It still struck me as noteworthy for the conspicuous absence of any mention of OpenStack in relation to cloud anything, especially at a conference led by a group telling their clients they need to aspire to being like public cloud providers. But it was certainly not the first time Gartner acknowledged the existence and relevance of open source at all. In fact, the main server session yesterday contained two slides on prevailing Linux distributions, and there was a whole session on the relevance of the Open Compute Project for the enterprise. If you have a means of accessing the slides for the Open Compute session, in fact, I’d recommend reviewing them. (I unfortunately didn’t get to attend the session, so I can’t provide any color to them.)

Tomorrow most of my schedule is filled with SDN-related sessions. I suspect I may have some additional color commentary to add thereafter.

UPDATE: I’ve posted my observations on Day 3 and overall conference takeaways over on my corporate blog. I use this space for capturing thoughts that either aren’t immediately relevant to my employer’s audience or aren’t representative of my employer’s views.

Just some of the blogs I read